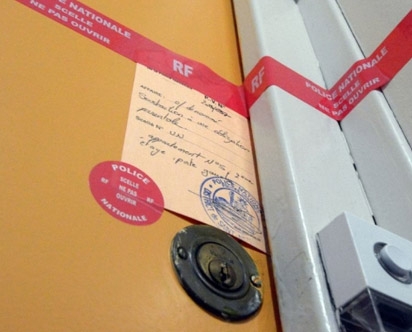 Seizure is the act whereby a judicial police authority confiscates documents or objects during a search or at the scene of an offence. Once seized, these items are immediately placed under seal. They will be used as evidence in criminal proceedings and will be examined by the Court of Justice.

When goods are seized, they are first placed under the authority of the judicial police and then the magistrate in charge of the investigation. At the same time, they are also under the responsibility of the district court or the high court and thus under the protection of the investigating judge. The confiscated objects are then stored in boxes and kept in a storage room. Valuable items are placed in safes or under lock and key. In the case of drugs, a sample will be taken and the rest completely destroyed.

Each item seized is given a double seal number and an information sheet. The procedure for opening or closing seals is governed by the Penal Code.

The different types of judicial seals

Goods subject to confiscation can be sealed: covered, uncovered or open.

• Covered seals concern small items (e.g. clothes, jewellery, etc.) which can be kept in a security envelope, box or bag. To open it and access the goods, it will be necessary to break the seal.

• Uncovered seals concern large items (e.g. furniture, cars, etc.) and weapons. When they are seized, the judicial police officers or gendarmes affix a seal sheet. They are entrusted to a third party who becomes their custodian.

• With the advent of technology and its corollary, cybercrime, there is more and more talk of digital seals.

• Traditionally, wax seals have been used to affix official seals, and thus seals, to goods to be recorded. Although they are becoming increasingly rare, they can still be used in some sealing operations.

• Today, the void seal is used more and more, which is a tamper-proof seal with numerous applications: police control, security of evidence, security of confidential envelopes, authenticity of luxury products... The fields of application of a VOID label are numerous.

• Another example is the (customisable) security seal, which can take the form of a permanent link, a simple security link or even a cable seal with or without progressive tightening.

• In order to close certain types of seals, you will need sealing pliers.

How long can a judicial seal be kept?

The length of time that property is kept under seal depends on the investigation, the inquiry and the final judgment. In other words, property placed under seal remains under seal for the duration of the legal proceedings. The court decision can then decide whether the items under seal are to be returned or destroyed. A right of appeal is granted for a very short period before the destruction of the seals.

There is however a limitation period in cases where the opening of the trial is delayed. In the absence of a final judgment, the limitation period is 3 years for misdemeanours and 10 years for a felony/homicide. Once this period has elapsed, the seals are unsealed immediately. Given the numerous constraints linked to the conservation of this evidence, the courts have opted for software that allows them to collect information on the goods placed under seal and thus to sort them out. Sealing is used in various procedures: commercial, criminal, administrative, civil... It is carried out by a competent authority that respects the law: judicial police officer, chief clerk, bailiff, customs officer...