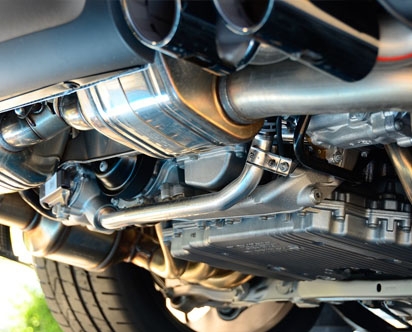 Applicable to a car or motorcycle, the collar connects the muffler to the exhaust system. Made of high-strength stainless steel, the exhaust collar ensures watertightness and uniform pressure distribution. Available in different sizes, it adapts to the different mechanical parts of the vehicle.

What is the purpose of an exhaust system ?

Also known as a muffler, the exhaust pipe is used to stabilize the pressure at the outlet of a vehicle's engine block. It is also used to evacuate and reduce pollution of the gases generated by the engine. It consists of several elements (expansion pot, silencer, toxic waste purification system) that reduce the noise associated with gas combustion.

In some countries, since the 1990s, catalytic converters have been mandatory on new vehicles. Its objective is to further reduce the harmfulness of exhaust gases. Its performance is undeniable for some pollutants, while for others it is non-existent. For aesthetic reasons, some cars may be equipped with several exhaust pipes that do not necessarily improve their performance.

When to change the exhaust pipe ?

When an exhaust port is defective, metallic clattering is heard. At the same time, the car emits much more smoke and makes a noise similar to that of a tractor.

The exhaust pipe must be replaced when :

• The exhaust manifold is deformed, cracked or broken due to engine heat.

• The exhaust system is rusty due to water and temperature changes.

• The exhaust is pierced because of the rust.

• The exhaust is cut off due to rust.

• The vehicle is declared too polluting following a roadworthiness test.

Note that when replacing an exhaust part, it is advisable to renew the other parts: silent blocks, nuts, exhaust pipe clamp, screws, seals...

How to change the exhaust pipe?

• First, place your car on a flat surface. Once cooled, lift it up with a jack and place it on candles.

• Remove the damaged pot and apply a metal brush stroke to remove traces of rust.

• Attach the exhaust hose clamp to the connection. Check that everything remains in place and that the pot does not rub against the frame.

Learn more about the hose clamp